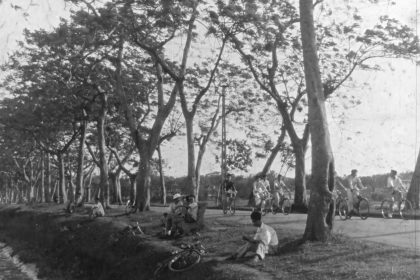 The screening presents two documentaries, both filmed in Hanoi, about 60 years apart: Hanoi Landscape by Bùi Đình Hạc and Nguyễn Đăng Bẩy, made in 1958, and Pomelo* by Trần Phương Thảo and Swann Dubus, shot from 2016 to 2018.

At which distance should one record a city? Landscape and people? From the eyes of Bùi Đình Hạc and Nguyễn Đăng Bẩy, Hanoi is a promise: a Hanoi after the event of Điện Biên Phủ. Under the “sky of freedom”, to cite the commentary, panoramas of the capital’s renown landmarks unfold like a series of postcards. A harmonious world where nature and heritage of then and now coexist. In long shots, at a small scale, people can be seen dressing neatly, working and playing with delight. Hope is an obvious choice. A sense of future glimmers amidst vast expanses of open space.

Almost 60 years later, the black and white pictures are now in color. In Pomelo, too, future peeks through from openings, from gaps. Gaps whose presence account for the emergence of a new construction site. Openings that mark the falling down of houses. The urban façade is of infinite thickness, constantly punctured only to be filled again. Such reestablishment is the world of the demolition workers, of scrap metal gleaners venturing from remote locales. Of laboring hands, of rubble.

In Trần Phương Thảo’s 2006 film Giấc Mơ Là Công Nhân (Workers’ Dreams), there was a scene of an intimate conversation taking place: a female worker from the peripheries, teaching the documentary filmmaker working on her debut feature, how to make films.** In Pomelo, through their quotidian doings, the scrap-collection women and the house demolition workers show the filmmaker what it means to live in this city. After 10 years of experience, to the filmmaker’s camera there’s no longer necessarily an enthusiasm for bridging distances. The relationship with the ones she films has also changed, no longer having a sense of eagerness even in close-up shots. The camera knows it cannot be involved nor change things, thus looks for the right vantage point, neither above nor below, not too close and not too far away. A world of darkness surrounded by construction materials. The brutality, nevertheless, cannot destroy tenderness and humour. And that’s how the people captured in the film live together within this state of things falling down.

Before entering the incessant sound world of Pomelo, Phong Cảnh Hà Nội (Hanoi Landscape) is showed in its current archival condition: that of soundlessness. The past now doesn’t speak, it only shows. It is what it is. Adequate for what it lacks of. Amongst a present that’s lacking because it’s overflowing. In Pomelo, there’s a promise. A new overpass will be built. Because of this, a whole film has also been built.

* Pomelo is the name of a street in Hanoi
** If there have been turning points within Vietnamese documentary filmmaking, then this was one such point.
*** The screening forms a connection with the double-bill events from NHƯ TRĂNG TRONG ĐÊM 1&2 which showed Đặng Nhật Minh’s documentary The Month Of May, The Faces In Time (1975) and Việt Linh’s feature film The Building (1999). 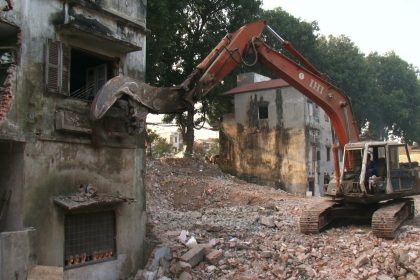 * Pomelo screens with subtitles in English
* Hanoi Landscape was produced by Vietnam Film Studio, digitised and provided by the Vietnam Film Institute. The film screens without sound, as per its current archival condition 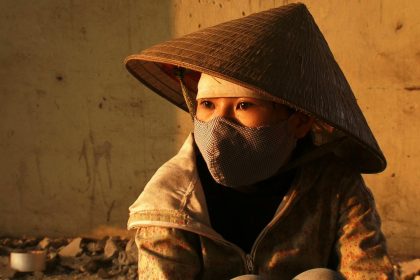 Director BÙI ĐÌNH HẠC was born in 1934 in Phú Thọ. He studied Directing at VGIK, then known as the All-Union State Institute of Cinematography, USSR. He made remarkable contributions to the cinema of North Vietnam through a diverse body of works and numerous major domestic and international prizes. His 1959 film Water Returns to Bắc Hưng Hải – winner of the Gold Medal for Documentary Film at the 1st Moscow International Film Festival – was acknowledged as the first representative of Vietnamese cinema to earn international accolades. He also participated in the production of Joris Ivens and Marceline Loridan-Ivens’s 1967 film 17th Parallel: Vietnam in War. Notable documentaries: Nguyễn Văn Trỗi Lives On (1970); Saigon, May 1975 (1975); An Ode to Uncle Hồ (1976); Nguyễn Ái Quốc Comes to Lenin (1979); Road back to the Fatherland (1980); Hồ Chí Minh – Portrait of a Person (1990). Feature films: Nguyễn Văn Trỗi (1966); Road back to the Motherland (1971); Tonkin Jasmine Flower (1973); Hanoi 12 Days and Nights (2002). Hanoi Landscape, completed in 1958, was director Bùi Đình Hạc’s first documentary.

NGUYỄN ĐĂNG BẨY (1923-2007) was a prominent cinematographer in the Vietnamese film scene. He had shot around 30 features among which are many celebrated classics by Trần Vũ such as The Passerine Bird (1961); We’ll Be Seeing Us Again (1974); A Stormy Ride (1978) alongside other films by other directors: Gushing Winds (1966); Nowhere to Hide (1971); The Holy Day (1976), to name a few. Starting out in a crew of photojournalists tasked with propagating Vietnamese resistance, his first camera being a spoil of war, Nguyễn Đăng Bẩy had completed numerous reportages, newsreels, and documentaries as he was entrusted with various political assignments throughout his career.

Born in 1977, TRẦN PHƯƠNG THẢO is a Vietnamese independent documentary filmmaker. She graduated from Hanoi Foreign Trade University and later studied Documentary Film at the University of Poitiers, French Republic. Trần Phương Thảo is one of the important figures behind the Vietnam affiliation of Ateliers Varan, the Paris-based documentary filmmaking training network whose foundation was fueled by ethnographer and filmmaker Jean Rouch’s proposition. Her 2006 debut documentary Workers’ Dreams received recognition at many international film festivals. Since then, she has worked with Swann Dubus on several documentary films following the stories and people in contemporary Vietnam. As of now, with her colleagues, Trần Phương Thảo is in charge of Varan Vietnam’s filmmaking camps targeting young Vietnamese filmmakers. Notable works: Workers’ Dreams (2006, Pierre and Yolande Perrault Grant, Cinéma du Réel, 2007); With or Without Me (2011, White Goose Prize, DMZ International Film Festival, Korea, 2012); Finding Phong (2015, Nanook Grand Prix, Jean Rouch Film Festival 2015); Pomelo (2019).

SWANN DUBUS was born in 1977 in Argenteuil, French Republic. Having received a Master in Literature, he pursued a doctorate degree in Cinema at Sorbonne Nouvelle University Paris 3. Since 2002, Swann has worked as a documentary film writer, director, cinematographer, editor, and producer in Europe, Africa, and Asia. He moved to Vietnam in 2007 and collaborates with Trần Phương Thảo in numerous film projects. Some of his films: 1970 – 1989 (2000); Letter for L and All the Others (2002); L.City (2006); With or Without Me (2011); Pomelo (2019).

NGUYỄN QUỐC THÀNH is a Hanoi-based artist, curator, and a co-founding member of Nhà Sàn Collective. In 2013, he founded Queer Forever! festival which has become an on-going project: a pop-up cinema, book and zine workshop, kitchen, space of queer gathering, listening, looking, making art, and loving. From 2019 to 2021, Thành realized Vuon Lai Wonderland project in Hanoi, Hue and HCMC to engage with Vietnamese queer cinema. 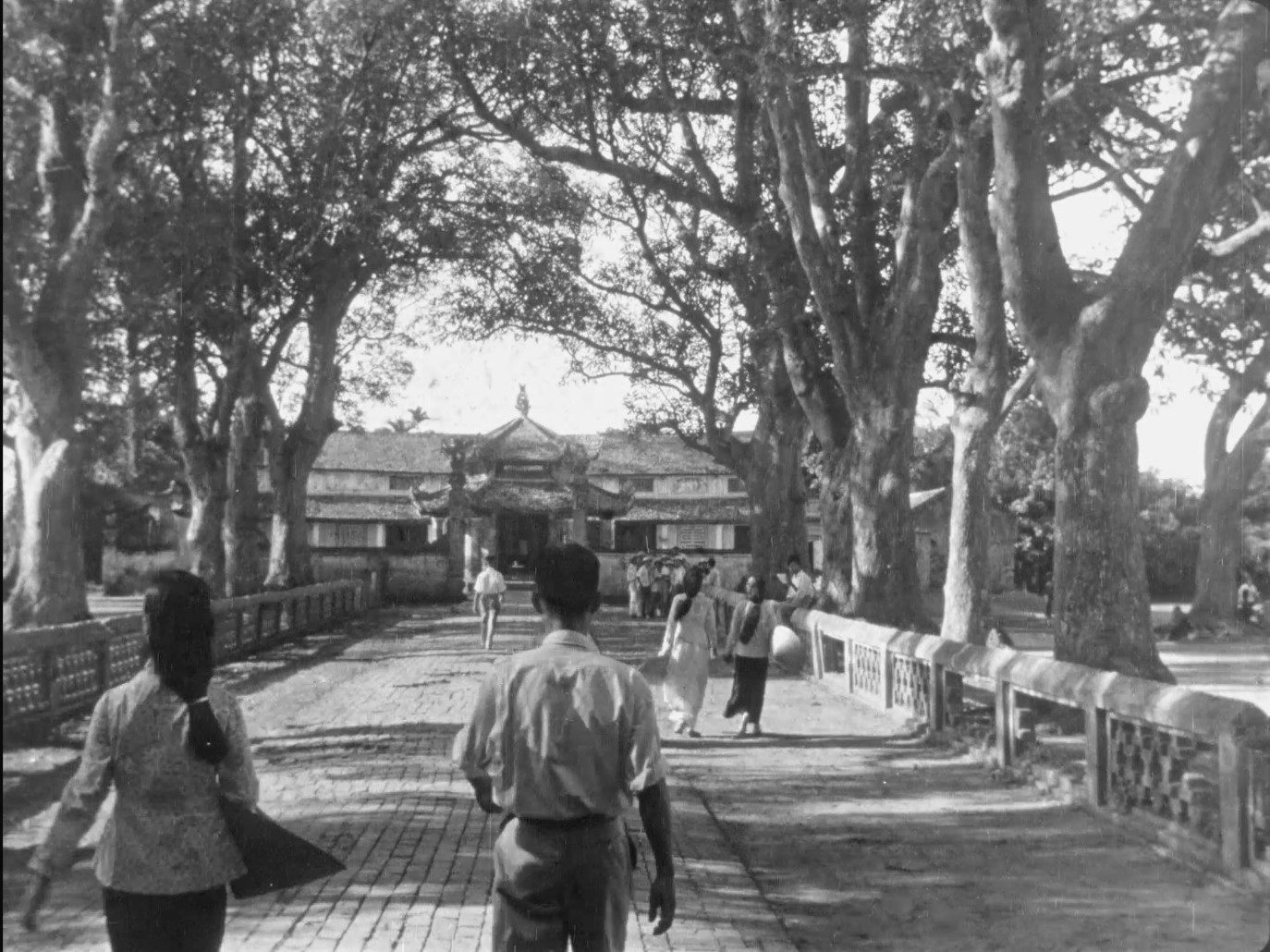