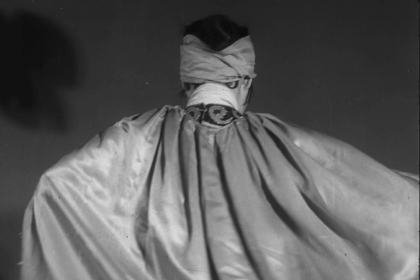 Blue/Green – Night Films In Hanoi is a kaleidoscope that reveals surprising resonances from many currents in Vietnamese cinema. Here, the night is a place that evokes endless inspirations and analogies.

Blue/Green opens by the journey in Vu Thi Lan Huong’s experimental film Blue/Green, from a personal state of mind, full of memories, to the outside world. The film screening travels into short films with distinctive characters, stories, and practices of storytelling. An unknown robot. A film crew making an advertisement. A train going back to someone’s hometown. A dancing Mr. Tễu. A university student feeling lost in melancholy. Lênin park on a full moon night. A wandering dog. A story about a girl working at a bar. A Cải lương stage play. An early morning in Hanoi. The intricate impressions from a reverberating supersonic assemblage of memories.

In this kaleidoscope, time moves flexibly. With each rotation, a film ends so that the audience can watch new worlds of images. 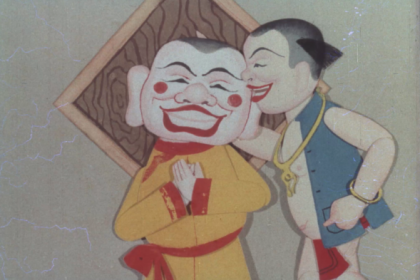 (Not listed according to film screening order)

BLUE/GREEN, Vũ Thị Lan Hương, experimental film, 2012, 10’
An impressionistic journey, from a state of mind and personal obsessions to the outside world. An exploration of familiar things and environment.

CADAVRE EXQUIS, Stéphanie Lansaque and François Leroy, animation, 2018, 12’50
Cadavre Exquis invites to a visual, acoustic and odorous ballad through the wandering of a one eyed dog. In the maze of Old Hanoi narrow streets, daily life and legend mingle on the syncopated rhythm of Xẩm, the Vietnamese blues.

THE MACHINE ON THE ROAD, Nguyễn Hữu Hồng, animation, 1980, 8’53
A biker discovered a strange machine in a box abandoned on the side of the road. After that, he had a shockingly unforgettable night.

THE MASK, Bùi Nga, animation, 1987, 8’22
The mask of Mr. Địa dances with Mr. Tễu and beautiful women. Everyone doesn’t like Mask because he does not know how to dance and disrupt them.

AFTER THE PERFORMANCE NIGHT, Vũ Trụ, documentary, 1982, 9’59
A nonprofessional art group from the Hanoi City Environment Company wins the Golden Medal with their performance of the play “Trần Quốc Toản Goes into Battle”. After the performance night, these nonprofessional performers continue to keep the city clean.

ON TRAIN JOURNEYS, Trần Thanh Hiên, documentary, 2009, 7’20
These footages are recorded on a train journey, in keeping with a distinctive way of observing and filming. To the filmmaker, the train carries many special personal meanings.

* The films screen with subtitles in English 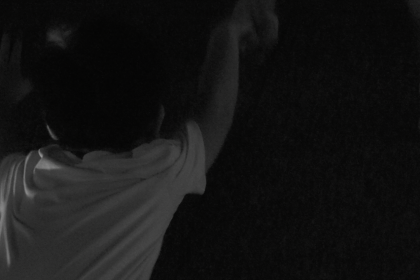 Tạ Minh Đức (1991), graduated from Hanoi University of Theater and Cinema. Films that he’s written and directed asks questions of the state of existing and relationships in life, human isolation, violence and latent control. Notable projects he’s taken part in include: Chọn Chuyển (Chosen) (San Art, HCMC, 2015), Mini DocFest (Hanoi DocLab, Hanoi, 2014), Autopsy Of The Day (Goethe-Institut Hanoi, 2013). In addition, he participated in Skylines With Flying People in 2012 and 2016.

Trần Thanh Hiên studied at Hanoi University of Industrial Fine Arts and works in graphic design. He started studying filmmaking in Hanoi DocLab’s first course, after which he participated in a number of film projects such as Trên Những Chuyến Tàu (On Train Journeys), Hai Ly 2011, Đồng Trung, Hard Rail Across A Gentle River. He undertook the Masters programme Transformational Leadership – majoring in Interculturality at the International Graduate School of Leadership, Philippines. Hiên currently lives in Hưng Yên, working in educational development projects.

Nguyễn Hữu Hồng (1931-2020) was a director born in Từ Sơn, Bắc Ninh. He was the eldest brother of two renowned filmmakers: director Nguyễn Hữu Luyện and cinematographer Nguyễn Hữu Tuấn. He studied cinematography and was involved in shooting newsreels at the Feature Film Studio, as well as filmed and directed animation films at the Vietnam Animation Film Studio and the HCMC General Film Studio. He also practiced painting even when without any formal background in the field. His wife, Ms. Ngọc Ngà, made dolls in the animation films that he directed. Some notable works include: Chuyện Ông Giáo (Story of the Teacher) (1971), Mầm Lá Xanh (The Green Seed) (1974), Trước Cửa Nhà Thỏ (In Front of Rabbit’s Door) (1979), Cỗ Máy Bên Đường (The Machine by the Wayside) (1980), Kiến Đỏ (Red Ant) (1983), Chú Voi Con (The Little Elephant) (1985).

Vũ Thị Lan Hương was born in 1988. She is a translator and poet. A friend of animals, friend of emotional expressions, a good person.

Nguyễn Diệu Linh has been an independent documentary filmmaker since 2017. She participated in documentary and fiction film projects in Hanoi and Ho Chi Minh city until 2021. Currently, she mostly participates in visual content development projects, rather than filmmaking. She is usually moved by female characters. She likes observing and looking for their stories.

EMIYA graduated from Class 35 of the Advanced Film – Television Directing course of the Hanoi University of Theatre and Cinema, with a strong passion for the robot film genre. Some of the films he has made include: Kết Nối (2017), Kiệu Điện Quang (2018), Đục Đụ C (2018), Khong Co Kien (2019). EMIYA currently works as a screenwriter and video game designer.

Stéphanie Lansaque & Francois Leroy are two French artists who both graduated from the Olivier de Serres School of Industrial Design and Apparel. One then moved on to study animation at the Gobelins School, while the other studied graphic design and art direction in print media and publishing. They love the atmosphere in Vietnam and have made many films about this country such as: Goodbye Mister Chu (2002), Red River, Song Hong (2012), Cold Coffee (2015) and Cadavre Exquis (2018).

Vũ Trụ was born in Hanoi in 1947 but grew up in his father’s hometown of Hưng Yên. He graduated from the Faculty of Literature, Hanoi National University of Education. When he was still at the Border Guard Command, he was sent to participate in the Fourth Class of the Vietnam Film School. After that, he worked at the Central Newsreels and Documentary Film Studio. He was also known as a filmmaker with many works focusing on nighttime, such as the documentaries: Sau Đêm Biểu Diễn (After The Performance Night) (1982) which won the Silver Lotus Award of the 6th Vietnam Film Festival (1983) and Khâm Thiên Sau Đêm Ấy (Khâm Thiên After That Night) (1983), participated in an international film festival. Some of his other notable works are: Hòa Bình Không Chỉ Một Ngày (Peace Not Just One Day) (1985), participated in an international film festival; Nhà Trẻ Diễn Châu (Diễn Châu Kindergarten) (1978); and Vành Nón Trao Duyên (The Rim of the Conical Hat as a Charm) (1982).

Đỗ Hà Lan is a final year student at Hanoi University of Theater and Cinema, wishing to become a filmmaker in the future. Hà Lan runs a Facebook page which publishes pieces on cinema, and organises screenings at various Hanoi locations, such as Vui Studio, amongst others. 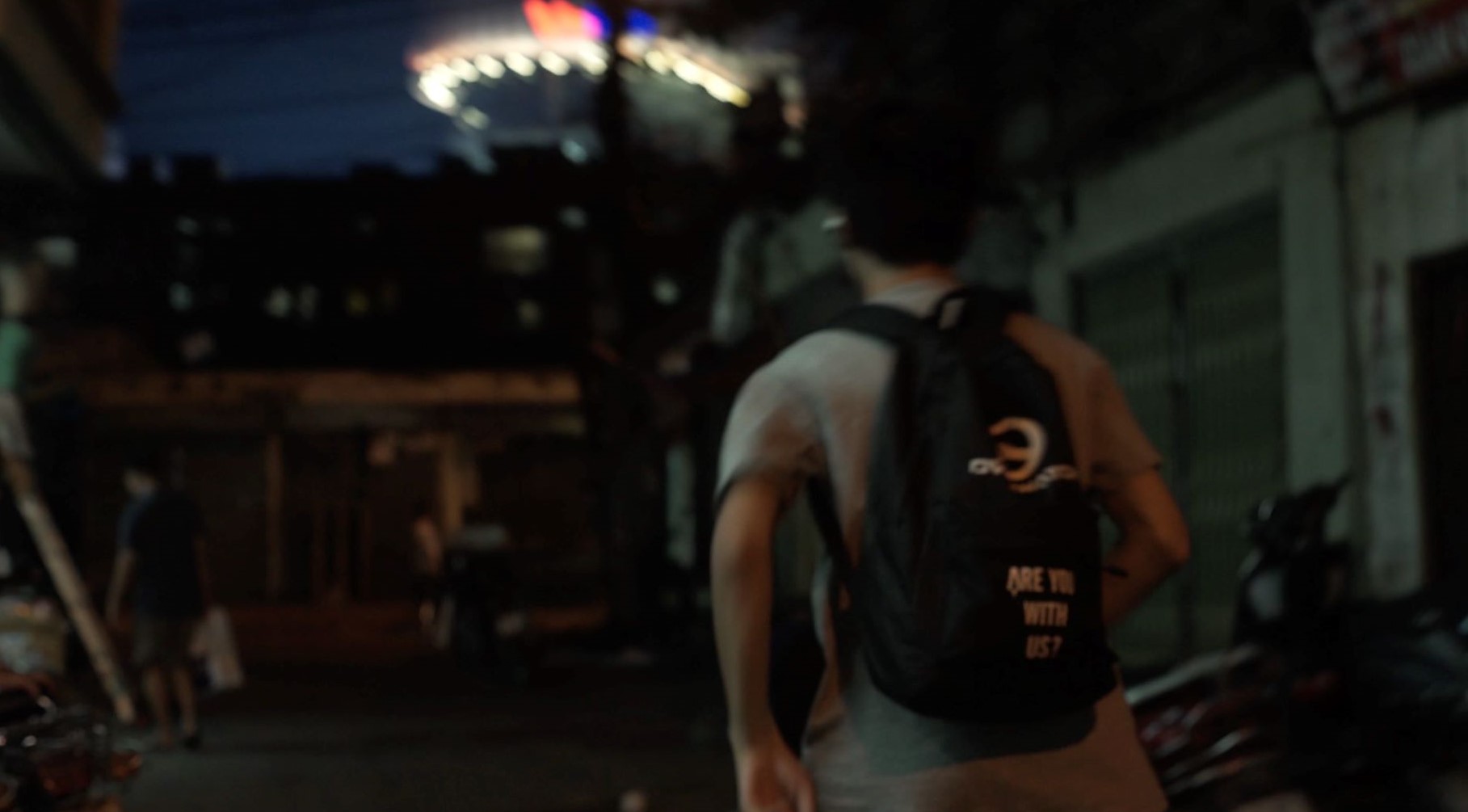